From over fifty entries into the  RHS Chelsea Plant of the Year competition we were delighted to have  one of our own selections shortlisted into the top 20. We will be adding this and 2 other shortlisted plants to our range in the near future. 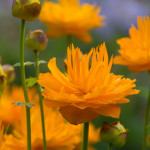 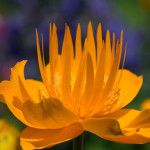 This show stopper was selected at Fairweather’s and launched by Hardy’s Cottage Plants. A very large flowered plant that is more floriflorous than other forms of Trollius. The orange flowers are prettily formed and up to 6cm in size. The amazing fringe of inner petals appear to glow in late spring sunlight. We will have limited stock available from summer 2015. 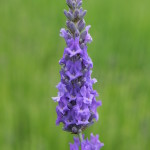 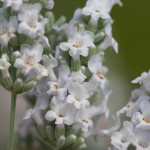 We have had strong relationship with Simon Charlesworth of Downderry Nursery for many years, launcing their Lavenders to the market, including ‘Melissa Lilac’ and ‘Blue Ice’.

The Lavandula Heavenly range resulted from a DEFRA funded project aiming to create shorter x intermedia lavenders with high oil yield for commercial production. Research was carried out at East Malling and Downderry nursery. They are shorter than other late flowering lavender, fantastic for bee’s and have strong aromatic properties. Available from Fairweather’s August 2014.

This  Eryngium  was a chance seedling found by Neil Alcock , Manager at Seiont Nurseries.  Its golden foliage contrasts dramatically with dark blue stems and flowers as it matures. We will have stock of Neptunes Gold from September 2014.

We have also seen great TV coverage of  plants that have been launched at Chelsea over the past few year that we have in our range, including Geum Totally Tangerine and Nepeta Summer Magic.